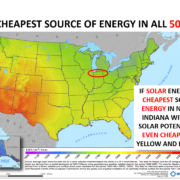 Utilities often have the obligation to the public to draft an integrated resource plan (“IRP”) every 3-5 years to determine the cheapest electricity generation mix for their customers. The resulting IRP is subject to independent third party approval by the Public Utility Commission (“PUC”). NIPSCO is a utility in northern Indiana. In their most recent resource plan, they evaluated 8 different scenarios from status quo (65% coal) to an almost ZERO EMISSION scenario (0% coal). Coal was step by step replaced by renewables, mostly solar. The result is astonishing: The cheapest scenario for their customers is 0% coal, with lots of NEW SOLAR replacing it. In other words, NEW SOLAR is cheaper than operating coal!

And even better: Have a look at the solar map for the US. Northern Indiana is green. And every state in the US is either green or better, (more sun) yellow and orange.

In other words, solar is the cheapest source of energy in all 50 US States! Only wind energy rivals solar.

What does it mean for the world? Well, let´s look at the world solar map. Same picture, northern Indiana is green, the world is also green, but mostly yellow and orange – even more sun. Therefore, we can conclude that solar is the cheapest source of energy worldwide now. What a conclusion, NEW SOLAR is cheaper now than operating coal plants! A remarkable finding.

Actually, a key finding, to make Paris work. We have economics at our back now.

And everybody can help – just TALK ABOUT it & save the planet!

There is nothing left to argue.

Link to article on Zepface